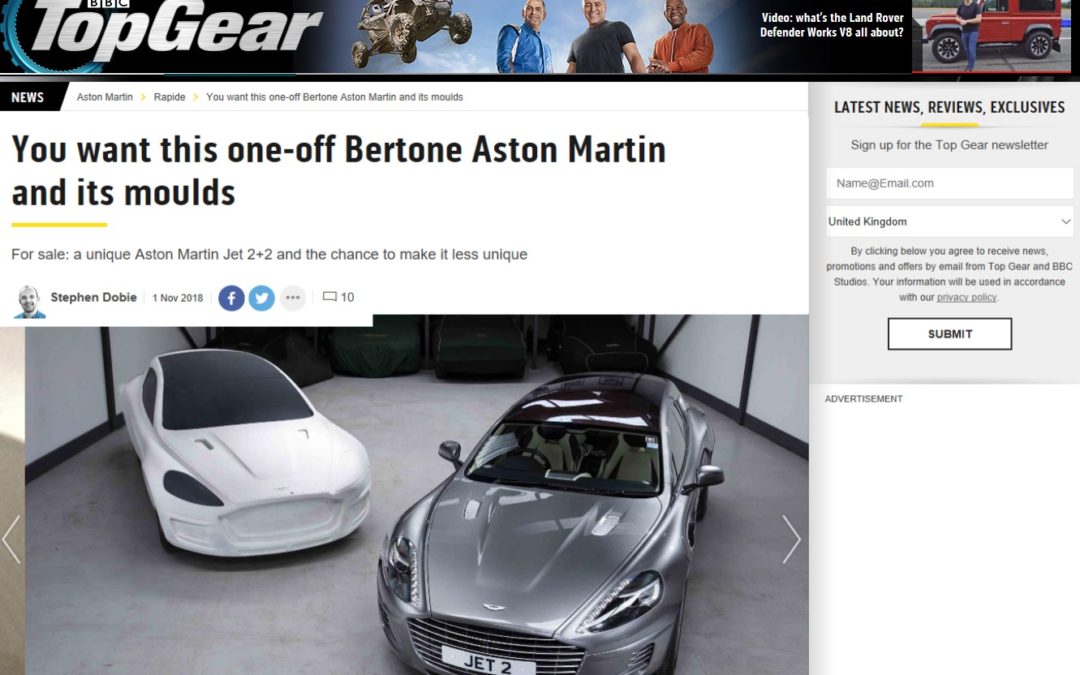 Barry Weir is selling his unique Aston Martin Jet 2+2 car along with its moulds and clay model.

An Original For Sale

British motoring enthusiast Barry Weir who designed and built his own Aston Martin-approved car is selling the luxury vehicle along with the unique opportunity for the buyer to reproduce the one-off model.

The chance discovery in a dusty Italian warehouse earlier this year of the moulds and full-size clay model used to create the car means that whoever buys the vehicle will be able to create their own version of the registered model- Aston Martin Jet 2.

In 2012 Barry designed his own Aston Martin based on the Rapide platform but as a shooting brake and with more headroom for the back seats, along with a host of other unique features, including a full length tinting glass roof and sliding rear floor at the touch of a button.

Aston Martin fully approved the design and build of the car and originally intended to put this model into production themselves along with legendary Italian coach builder Bertone.

The car was built in time for the 2013 Geneva Motor Show where it was unveiled to critical acclaim and stole the show.

It turned out to be the last car ever to be built by Bertone before the designer went bust and Barry had presumed that fibre glass moulds and full-sized clay model used to build the car had been lost forever.

But earlier this year Barry happened to come across the fibre glass moulds and full sized clay model for sale in an Italian auction while browsing on the internet.

After negotiations, the parts were taken out of the auction and Barry brought them back to the UK.

Barry is now selling the car, the moulds, clay model, and the road registered number plate ‘Jet 2’. This means that anyone who buys them together will be able to reproduce the one-off car.

“When the car was built, Bertone were keen to build 10 cars and then Aston Martin wanted to put a version into full production,” said Barry.

“Unfortunately, Bertone went bust and it never happened. It meant, however, that mine became a unique example of an Aston Martin, an entirely new production car which consisted of just one vehicle.

“Now we have the moulds, the clay model, the number plate and the finished car, I’m minded to sell the complete package and the buyer can choose what they wish to do with it.  They could reproduce the car with the moulds and model or, alternatively, have it as a one-off production car which is registered as Aston Martin Jet 2; which is a new model.

‘Part of me would love to see it reproduced but another part likes the idea that it remains a unique one-off as part of automobile and Aston Martin history.’

The genesis of Jet 2+2 began in the summer of 2012, when Barry found himself sitting with the men from Bertone at the Marco Polo airport in Venice.

He persuaded them to build him a unique car after contacting  Aston Martin who were already aware of Barry after he became first man to drive a historic car around the world in 80 days in a 1954 Aston Martin DB2/4 in 2000; making him a true world champion rally driver.

The first version of the new car was designed on a couple of serviettes by Barry as he waited at the airport. Incredibly, it was the last car ever to be built by Bertone.

“I wanted them to build a shooting brake, a useful Aston based on a Rapide,” said Barry. “It’s a family friendly sports car that can sit people comfortably in the back with a large boot or create a two-seater with an enourmous boot space; ideal for luxury shopping trips.”

Drawings, renderings and photographic imagery were shown to the board of Aston Martin. Aston’s chief designer Marek Reichman made the comment, “Wow, where did that come from?”. Other comments included, “We’ve got to build that car”. The board then gave approval for Bertone to produce the Jet 2+2, as it became known.

“They worked all over Christmas, and by the early part of January we had a full-scale plaster model mock-up of the car,” said Barry, who played a continuing role in the design of his dream car.

In total, the design and build took around three-and-a-half months, with Bertone scanning the model and creating reverse moulds before the company’s crack team of engineers beat in the panels by hand using aluminium, sheet metal and carbon fibre.

A new design for the front seats and a dimmable panoramic glass roof, which changes colour from clear to blue, make the interior feel airy and much larger than the standard Rapide. This smart roof which has since been adopted by other manufacturers runs the length of the car. The rear seats fold flat at the press of a button allowing the boot floor to extend automatically right up to the back of the front seats.

With an identical wheelbase to the Rapide, Bertone managed to keep the kerb weight almost identical to the donor car, at around 1990kg, resulting in the same performance but in a far more practical package.

The paintwork and interior touches, including unique wood, two-tone leather and glazed aluminium which were chosen by Barry, whose name is etched into a plaque inside the cabin.

“It was a halo car for Aston Martin,” said Barry. “At the time it was the fastest shooting brake in the world at 200mph, reaching 60mph in about 5.3 seconds.

“It’s something truly unique, and is registered as Aston Martin Jet 2.”

Unlike the Jet 2 concept of 2004, which according to Barry “was purely a shell of car with no engine”, the Jet 2+2 (denoting its four seats) was an all-new production.

Now Barry is keen to find out if someone wants to buy the car along with the moulds so they can then ensure it remains as a true one-off or, alternatively, use the moulds for repairs or to help make copies of this stunning car. 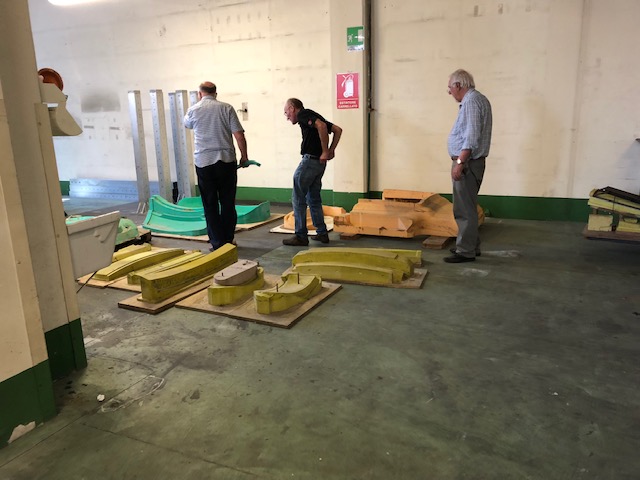 Early in 2018, Barry heard that the original model and moulds for his unique Aston Martin had been stored in a warehouse in Italy With designer Bertone having gone bust Barry had thought the pieces has been lost forever. But to Barry’s delight he was able to track them down to a warehouse in Turin and he decided to buy them all so he could sell them along with the Aston Martin Jet 2+2 as a unique package.

You want this one-off Bertone Aston Martin and its moulds

For sale: a unique Aston Martin Jet 2+2 and the chance to make it less unique

Opportunities like this don’t arise very often. For sale are the two cars you see in the picture above. On the right, an Aston Martin Jet 2+2, a one-off Rapide shooting brake, and on the left, the clay model that’ll allow you to build more of them if you so desire. Or you can squirrel it away to make sure the right-hand car remains unique.

If you’ve forgotten about the Jet 2+2, you can use our drive of the car to jog your memory. In short, legendary Italian styling house Bertone took the already not-ugly Aston Martin Rapide and made it even less ugly. Shooting brakes always look a bit cooler than saloons, especially when they’re unique one-offs, and we were quite infatuated when we got up close and personal with the 2+2.

Beneath the surface is the same 5.9-litre V12 as the regular Rapide, so you can expect not quite enough torque but the correct amount of noise. To that, the Jet 2+2 adds more luggage space, though no more legroom, always a Rapide bugbear. Who needs friends when you can fill the boot with dogs, though?

Perhaps the biggest advantage of the new shape is the adoption of a huge glass roof, one which gives a much better sensation of space and luxury inside, even if the core dimensions are actually the same.

The man selling these cars – plus the moulds that help turn the white, clay one on the left into the grey, metal one on the right – is Barry Weir, who designed the 2+2 in 2012 and has owned it since. He spotted the mould and tooling in an auction after Bertone went bust. He snapped them up, stored them away but has now decided it’s time to sell the whole lot.

“When the car was built, Bertone were keen to build 10 cars and then Aston Martin wanted to put a version into full production,” says Weir. “Unfortunately, Bertone went bust and it never happened. It meant, however, that mine became a unique example of an Aston Martin, an entirely new production car which consisted of just one vehicle.”

Indeed, this is the last car built by Bertone before it shut up shop. Quite the outro. Its conception was as romantic as you’d hope for an Aston Martin penned by Bertone, too, the Jet 2+2 having been sketched on serviettes as Weir chatted to some Bertone folk in Venice airport about his dream car. Yep, we hear classical music in the background as we imagine the scene, too.

“Part of me would love to see it reproduced but another part likes the idea that it remains a unique one-off as part of automobile and Aston Martin history,” says Weir. The choice is yours if you offer the right amount, of course. That’s likely a seven-figure sum, as you might expect, but word is it’s under £3m. Head over to Classicmobilia if you’re thusly equipped… 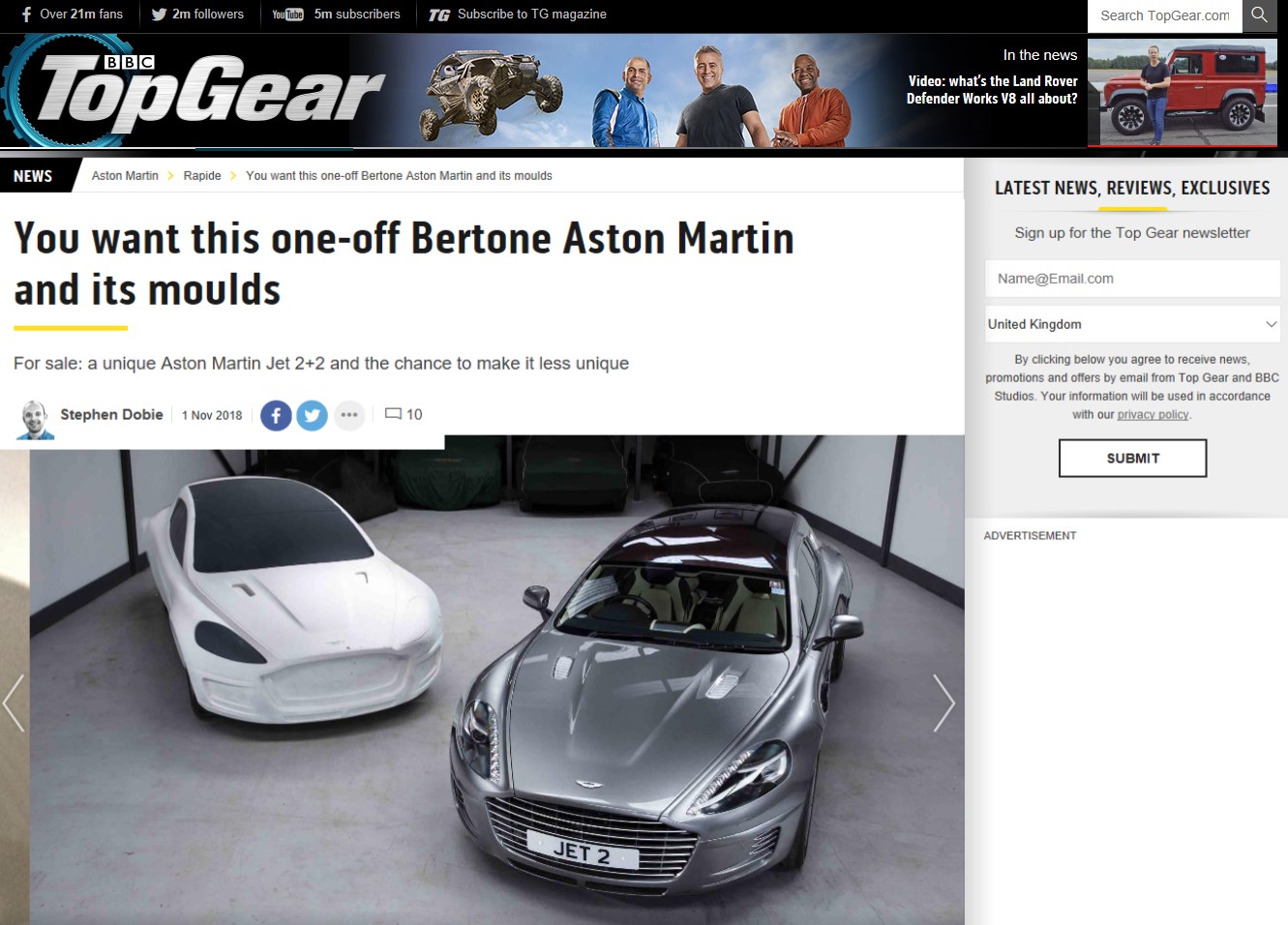 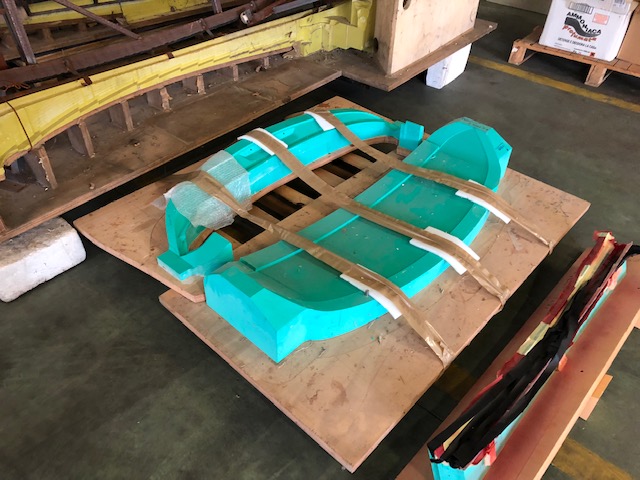 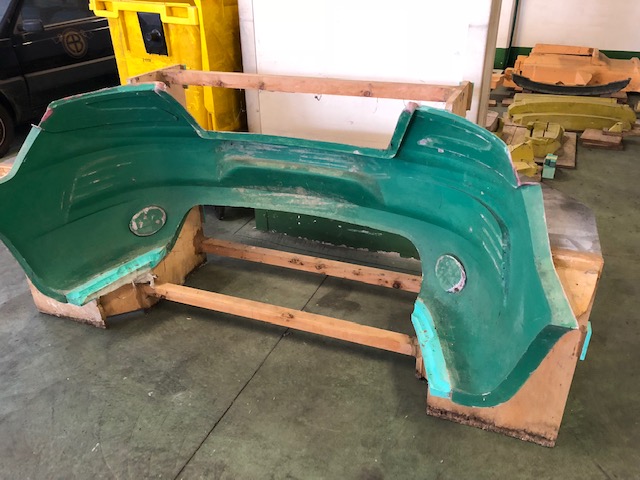