Barry Weir was interviewed by the Guernsey Press about his life and the island.

Guernsey- An Island of Common Sense

When Barry Weir retired from rallying the Guernsey Press were keen to hear more.

Barry had entered and won scores of rallies and holds the honour of being the first person to race an historic car around the world in 80 days.

The Guernsey Press conducted a full interview with Barry and got his thoughts on living on the island.

As a result the newspaper dedicated a full page to Barry who went on to explain how Guernsey had common sense and urged people to visit the  island. 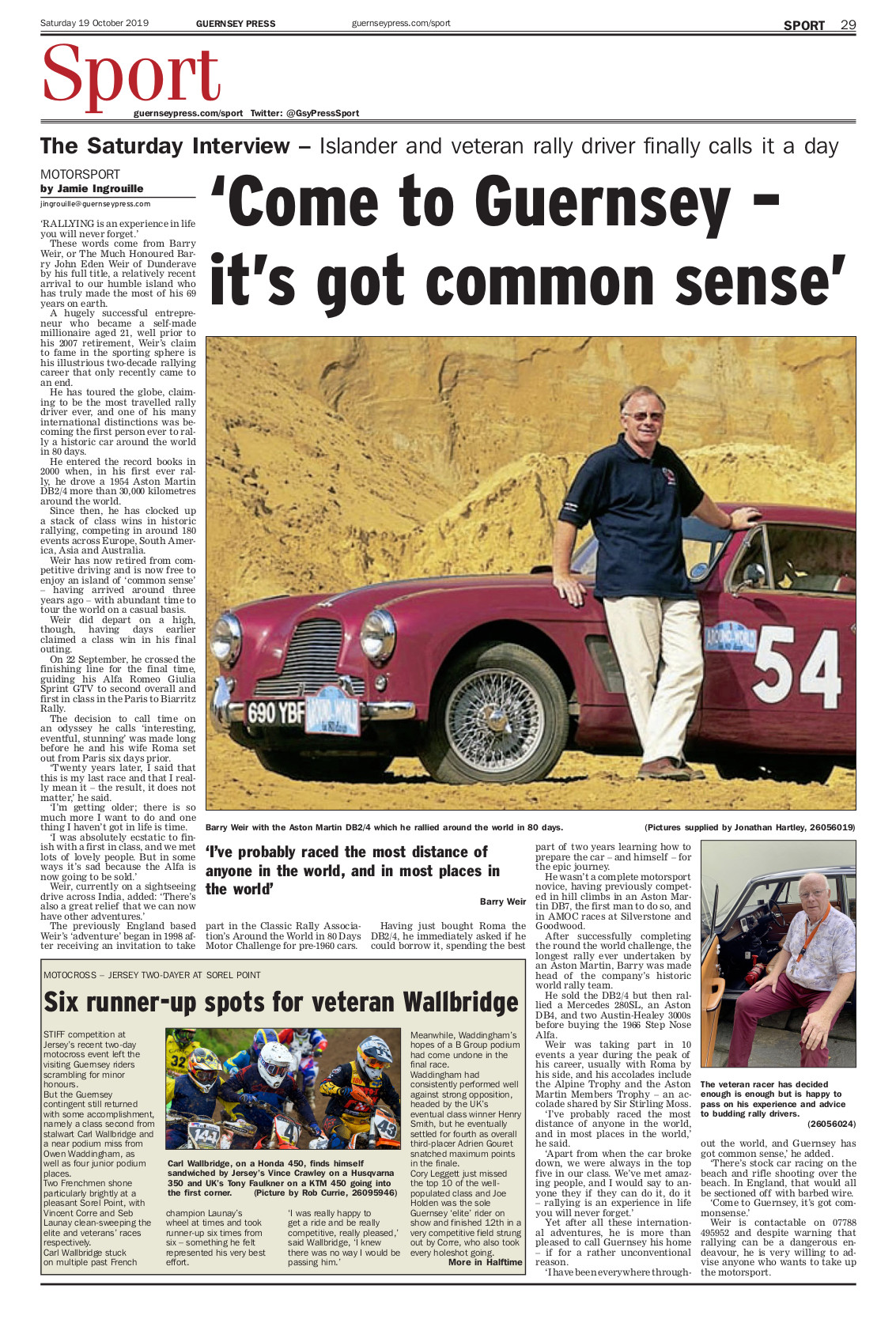 A Guernsey business man who was the first person to rally an historic car around the world in 80 days has retired from competition at the age of 69, days after a class win in his final outing.

Since then, he has clocked up a stack of class wins in historic rallying, competing in around scores of events across Europe, South America, Asia and Australia.

On September 22, the retired Guernsey businessman crossed the finishing line for the final time, guiding his Alfa Romeo Giulia Sprint GTV to second overall and first in class in the Paris to Biarritz Rally.

The decision to call time on an odyssey he calls “interesting, eventful, stunning” was made long before he set out from Paris on September 16.

“I’m getting older, there is so much more I want to do and one thing I haven’t got in life is time,” he said, already planning a sightseeing drive across India, starting from Chennai.

“I was absolutely ecstatic to finish with a first in class, and we met lots of lovely people. But in some ways it’s sad because the Alfa is now going to be sold.

“There’s also a great relief that we can now have other adventures.”

Barry’s rallying adventure began in 1998 when he was sent an invitation to take part in the Classic Rally Association’s Around the World in 80 Days Motor Challenge for pre-1960 cars.

He spent the best part of two years learning how to prepare the car – and himself – for the epic journey.

He wasn’t a complete motorsport novice, having previously competed in hill climbs in an Aston Martin DB7, the first man to do so, and in AMOC races at Silverstone and Goodwood.

After successfully completing the round the world challenge, the longest rally ever undertaken by an Aston Martin, Barry was made head of the company’s historic world rally team.

At the height of his rallying career, Barry was taking part in 10 events a year.

“I’ve probably raced the most distance of anyone in the world, and in most places in the world,” he said, earning the Alpine Trophy and the Aston Martin Members Trophy – an accolade shared by Sir Stirling Moss – along the way.

“Apart from when the car broke down, we were always in the top five in our class. We’ve met amazing people, and I would say to anyone they if they can do it, do it – rallying is an experience in life you will never forget.”